Mammalian insectivores, moles are often confused with rodents, though the two creatures keep different diets and habits. While the eastern mole is the most prevalent species in North America, hairy tailed and Western North American moles also inhabit specific regions in the United States. The animals are particularly annoying for home and business owners who maintain expensive landscaping. 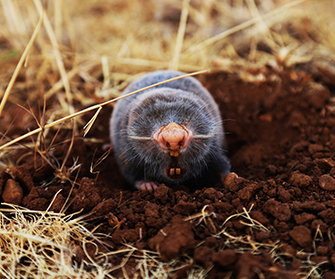 Small creatures, moles generally do not exceed 6 inches (16 cm) in length and typically weigh close to 3 ounces (75 g). Most species have webbed front claws that make them especially capable diggers. Eastern moles are grayish-brown in color and their fur is soft and silk-like. As the animals spend the majority of their lives underground, they have little need for highly developed senses of sight or sound. As such, moles have incredibly small eyes and ears that are hard to see with the naked human eye.

Moles make subterranean homes for protection from predators, to rear young, and to overwinter in regions with cold weather. The adept diggers prefer loose soils, like sand, and avoid clay and stony soils, which impede their ability to dig efficiently. Consequently, moles are often found in meadows, grasslands, and woodlands. They particularly enjoy making homes in human landscaping as the tailored and damp ground is ideal for digging.

Given their preferred habitats and activities, moles are rarely seen inside buildings. Land owners who use mole-preferred soils on their plots are at highest risk of attracting the tiny mammals. Expanses of property used for growing crops and golf courses are also favored sites for mole burrowing. Soils high in acidity, on the other hand, repel the pests.

Since they tunnel so close to ground surfaces, moles often leave behind unsightly mounds of upturned dirt and kill grass and other plants when they burrow into the ground. As infestations of moles grow, they are capable of more destruction and can totally ruin otherwise aesthetically pleasing fields, as well as destroy crop yields for farmers. Additionally, the mammals inhabit sports fields, rendering them unusable.

Employing mole control methods can be tedious and expensive. Unless affected property owners have the time to monitor traps and plant boundaries to exclude the small mammals from the area, specialized services should be enlisted to eliminate mole infestations. Flooding mole hills is sometimes effective during the spring. However, adult moles are usually able to flee and later re-inhabit the area.

Moles are difficult to trap and populations of the pest are hard to control. Individuals dealing with mole infestations should call Critter Control, as we maintain experienced workforces that specialize in mole removal. Let our trained technicians use their expertise to eradicate mole problems quickly and efficiently.

We can help you get rid of mole problems.  Call today!

Request a Quote
Moles
Mole tunnels, mole damage to your lawn, or mounds in your yard? Get rid of moles in your yard. Call your local Critter Control office today at 800 CRITTER for effective mole removal services. We practice safe and effective mole removal solutions in order to eliminate any mole problems you may be having.
Call For A Fast & FREE Phone Estimate Today
412.767.4067
(No Cats & Dogs)